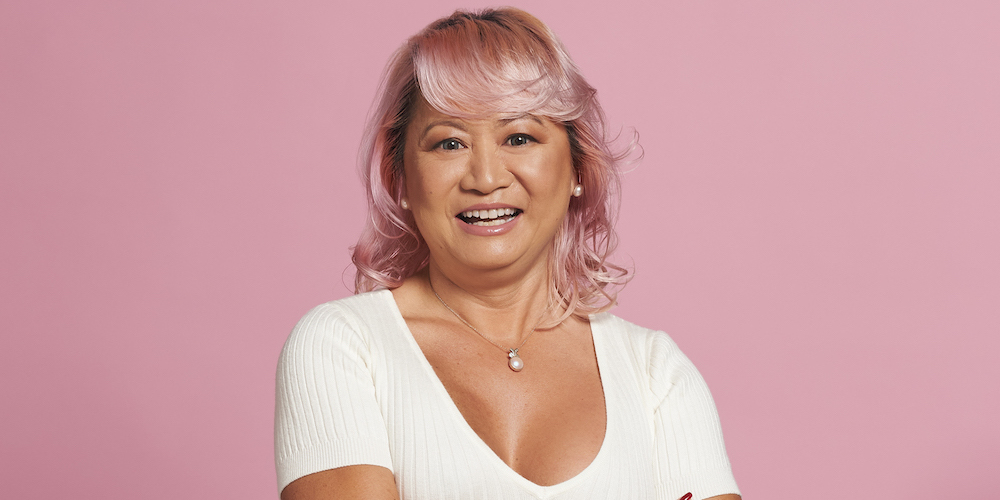 Lan Crowley, 51, was diagnosed eight years ago with Stage 3 invasive ductal carcinoma breast cancer. She has three children, two sons, aged 17 and 15 years, and one daughter, 13.

“Nothing can prepare you for a breast cancer diagnosis. About ten years ago I had several small lumps in my right breast. I put them down to breastfeeding. One day though I mentioned them to my doctor. The lumps had increased and had become painful, like bruises whenever I palpitated it.

“I was referred for an ultrasound and fine needle biopsy. I was relatively unconcerned. I’d organised to meet some friends at the park – along with my children – and asked them to look after my kids while I ran up the road for my appointment. Little did I know that my appointment was going to change my life.

The ultrasound found a network of activity in my right breast, so I was immediately given a referral for a mammogram, then another for a core biopsy. A core biopsy is just what it sounds like – they burrow in and ‘core’ out the lumps, like a punch hole. The procedure is done under local anaesthetic and it’s quite painful.

“By this time, my children were still at the park with my friends and I had to call them to tell them that something serious was happening and I had been delayed. By the time I left the clinic I’d had three core biopsies – two in my right breast and one under my arm and three mammograms. That night I was in such pain I couldn’t even eat my dinner.

“A couple of days later the results came in: I had Stage 3 invasive ductal carcinoma (IDC). This type of cancer begin in the milk ducts of the breast and spreads to surrounding tissue and lymph nodes. In my case it had spread to the lymph nodes too. This type of cancer affects women aged 55 to 74 – at that time I was young to have it, at 43 years of age.

“My cancer treatment team were fantastic, but there was so much information to take in and it all happens so fast: from diagnosis to operation to active treatments. Within three weeks of my diagnosis I had a mastectomy on my right breast and all my lymph nodes under the arm were removed on that side. It was the best treatment for me to prevent the cancer from coming back.

“It’s so important to find out as many of your options as possible before you begin your treatment – that’s why Pink Hope and it’s community is so important. I wanted to have a bi-lateral mastectomy (to have both breasts removed), but it wasn’t considered an option for me. It would have cost the government more money to have this operation. Even reconstructive surgery wasn’t offered to me – I had to request it.

“And I understand why. Each member of your cancer team has a specific job at a particular stage along your journey: to remove the tumours; to treat you with chemo and radiation; to help you recover from active treatment; and to provide you with ongoing treatments to prevent a recurrence. The end game is to keep the patient alive. I was only told the information I needed at the time, not for my future. I had young children; I had a career; I was sexually active. I wanted to still be able to live my life afterwards.

“I had my mastectomy and, at my request, they inserted a preliminary expander to help preserve the pocket of the breast for a reconstruction. However, after three attempts at a reconstruction, they had to take healthy tissue from my back to reconstruct my breast. Radiation treatments had overly damaged the chest area and this was my final option for a breast reconstruction.

“Having breast cancer is a traumatic experience. Surviving means you need to mentally minimise the damage that happens to you on an emotional, mental and physical level. I have suffered permanent damage from having had breast cancer treatments. It’s why I’m passionate about speaking about my experience. It’s important that people know they are not alone, that they are informed and know where to find support. The 5 years survival rate of breast cancer is currently 90%, which is very good. There is a life after cancer.

“I am still undergoing treatment to prevent recurrence because I have a hormone positive receptor type cancer. I need to stop my body from making/receiving the hormones so that the cancer can’t activate or progress. This means my body is in a ‘chemical menopause’: which brings its own side effects. Whenever I’ve had to stop the hormone medication prior to having surgeries (due to clotting risk) I find that I’m not in as much pain, my brain wakes up, and my energy levels improve so much.: I normally suffer from joint and muscle pain and peripheral nerve pain from chemo damage. Winter makes the pain worse.

“Prior to cancer, I was running 10km three times a week, swimming 3km every other day, doing weights, running the City to Surf. It was a surprise to be diagnosed with cancer despite my fitness and my good health.

“I had to bury the person I was prior to my diagnosis in order to move on. I’m not that person anymore. I had to make peace with the fact that that person died when they took the tumour out.

“My memory, which was once near-perfect, is no longer the same. I’ve had to work within these limitations now. I’ve taken early retirement, as I can no longer work in law. That was another loss for me. A loss of that part of my life. Because work wasn’t just ‘work’ for me: I had a community that I was part of. I wasn’t just someone’s mum. It was a diversified and balanced life.

“I’ve had to find a new balance. I’m happy with who I am now. It’s a limited life, but it has unexpected perks. Being positive means survival for me. I’m grateful that I can live a normal life and do normal things. When I lost my breast, I was traumatised for some time because I thought it would be a flat surface with a line scar, but I was actually concave in the chest afterwards. Now though, after reconstruction I can wear a bikini and people won’t notice. But they may notice the scar on my back.

“The human state of mind is so enduring and our survival instinct is so strong, especially when we are mothers. I did not want to survive for me, especially during chemo, when it was just so hard and brutal. But I wanted to survive for my children and my partner.

“The Pink Hope community helped me so much. When I was first diagnosed I was looking for people who were at the same life phase as myself: those with young children, still working and relatively active. Many people who have the type of cancer I have are much older, I didn’t feel that I belonged in the same support groups. But I needed to speak to those with similar issues: how to help my family get through this with minimal mental and emotional trauma; how to manage work and a young partner; how to prepare my family in case I didn’t pull through. My children were very young then: 5, 7 and 9. And Pink Hope was fantastic – they are an amazing resource. The Pink Hope community is generally younger and in the same life phase as me. They helped me in a very big way, especially regarding my reconstruction options. Everyone is so generous with their time and sharing their stories – I felt their support and much less alone.

“I’m so proud to be wearing the ‘Illuminate’ lipstick. It’s a very natural and beautiful shade. ‘Illuminate’ to me represents what Pink Hope is and does. Pink Hopes shines a light on cancer, and the effects it has on families and communities. ‘Illuminate’ also means to clarify, and Pink Hope is a place for people to find help, information and support.

‘There’s an African word ‘Ubuntu.’ It means ‘I am, because we are’. It’s relevant to me because there is deep compassion and understanding in the Pink Hope community. We raise each other up and give each other support and hope. If you are supported, then so am I.”