Cheryl’s story: “I am a tough old bird” 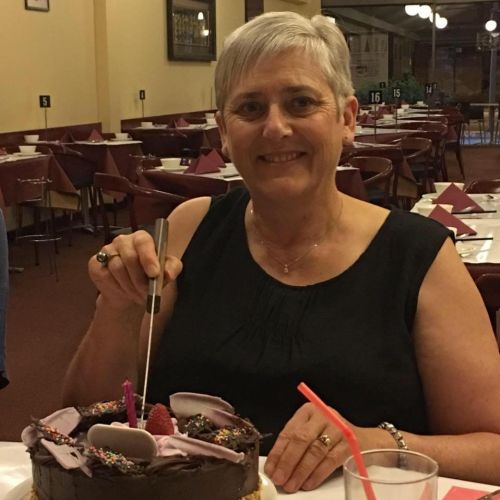 My story is a bit of a longer one… It’s over 14 years since my first cancer diagnosis.

Back in 2006, I found the lump when I was sitting down in my lounge chair. I’d had a mammogram four months earlier and everything was fine, but I remember thinking, ‘Oh, something feels funny’.

I touched my right breast and it felt like I had a very flat stone under my skin. It was odd. Even my breast specialist later said to me: ‘How did you feel this cancer?’ And I told her I just had this feeling, a tingling kind of feeling; which apparently is how a lot of women with this type of breast cancer first notice it.

Breast cancer diagnosis
It was triple-negative breast cancer. After finishing my treatment my breast specialist asked me to look into genetic testing. I was a little surprised, but I did have multiple cousins – first and second cousins – on my mother's side, who had had breast cancer. Some who'd passed away even though their genetic testing had been negative. They were just classed as a high-risk family.

When I had my genetic testing done, they found I had BRCA 1, but when they tested my mother, she was negative. My father, who had passed away in 1981 (but not from a BRCA cancer) was the carrier.

After the genetic testing results, my specialist and the Peter MacCallum counsellor said to me: ‘You've got a 40% chance of getting ovarian cancer’. I’d already had a hysterectomy when I was 38, but back then my tubes and ovaries were left intact because of my age. It was a no brainer to get those removed this time.

However, when I woke up after the surgery, my gynecological specialist and my husband were standing by my bed and he said: ‘I’m sorry, you've already got ovarian cancer’.

Ovarian Cancer detected
My treatment plan was Intraperitoneal Chemotherapy (IP chemo) and that was a very tough 18 chemo sessions in 18 weeks. I probably had seven or eight months before the first recurrence. My specialist waited another three or four months before they said I had better start on the second line chemo.

By the time I had the third cycle of that chemo, my numbers were looking really good. So, they advised me to have the fourth cycle and save the other two doses for future recurrences. Of course, with ovarian cancer, you've got to expect recurrences.

I finished the fourth cycle in March 2017, and I was eligible to start taking the PARP inhibitor Lynparza which had just been approved by our government and put on the PBS. There have been some ups and downs, but for me, I feel better on Lynparza than I do having chemo. So, I really hope that it keeps doing its job in helping my body to fight cancer.

Feeling positive
Right now, I'm doing well. I've had more ovarian cancer recurrences in 2018 and 2019. My doctors keep an eye on any hotspots that slowly grow to about the size of a walnut and then they book me in for laparoscopic surgery to remove the tumour. I’ve also had my gall bladder removed and a hernia repair during one of these surgeries; both related to my cancer treatments.

I started this journey with a one-year-old granddaughter and a two-year-old grandson and now there are eight grandchildren, ranging from 16 to two years! So, I've been blessed to see six more ‘grandies’; which has been absolutely fantastic.

They do keep you up on those bad days, along with my family, who have been really supportive. My husband's a very logical man and he's been very good at keeping me on the straight and narrow when I get a little off track. He's also been very good about speaking to other men who've gone through this with their wives; asking them things like ‘What helped you?’

At the end of last year, when I had a check-up with my ovarian oncologist, he said to me, ‘Cheryl, you realise that next March it'll be five years since you were diagnosed with ovarian cancer? I have to tell you that statistically, your chances of getting another breast cancer will go up dramatically at that point.’

So, to be safe, I went to six monthly checkups with my breast specialist and booked in to do a breast MRI… Long story short, in June I had to have a bilateral mastectomy because the MRI showed another totally different type of breast cancer!

But I am a tough old bird as someone once told me, and I feel happy that I've got to this stage. I feel very confident with my medical team and am very happy that they were (and are) always so proactive. If I'm not proactive and they're not proactive, then we won't catch these events early enough to be able to successfully treat them.

Sure, not every day is a good day, but I don’t think about that as you just have to get on with life. I may look like a patchwork quilt on my front as there has been so much cut and dissected, but I'm still me. My husband just calls it the roadmap of my life. It’s rather good of him to look at it that like, don’t you think?