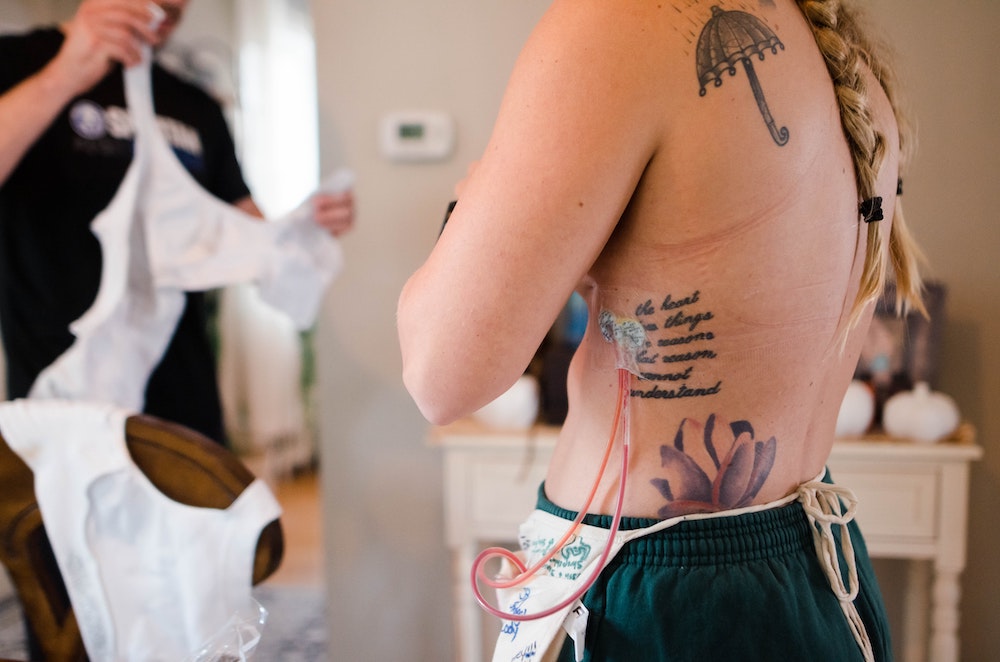 Shannon Chandler from MediMassage is a remedial massage therapist (DipRM) and Vodder and Chickly trained lymphatic therapist. Shannon focuses on injured tissue and specialises in post-op recovery and scar healing using manual lymphatic drainage. Shannon has been working with patients who’ve had plastic or reconstructive surgery since 2008. She works very closely with plastic surgeons and has spent a lot of time in theatre where she has observed procedures like abdominoplasty.

While Shannon works on the breast scars of patients who’ve had a mastectomy, when it comes to DIEP reconstruction she tends to work more on their abdominal scars. Ideally, she likes to see patients the day before surgery, as “the benefit of lymphatic therapy has a 24/48-hour window”. Shannon also talks to her patients about what to expect after surgery, “the fear that’s related to a hip-to-hip scar is huge. If I can see women pre-op, I can take away the fear they have that makes them hold their whole body and hunch over their abdomen after surgery as a way of protection. It’s just as important to prepare the mind to be most comfortable post-operatively as it is to prep the body to be most comfortable post-operatively”.

Shannon says that in a perfect world she’d see patients as early 3 or 4 days after surgery (with the agreement of the surgeon, who often add her to a patient’s post-op notes). In the first 10 days after surgery Shannon does lymphatic work and doesn’t work directly on the scar, “The scar is still setting. Skin needs to stick and re-adhere. In that first ten days, swelling is what I can help with the most physically, and then it’s the mental component by asking ‘how comfortable are you, are you terrified?’, all while using touch as well”.

As well as manual lymphatic drainage, Shannon also uses LED light therapy, “I’m one of the few people who use Lutronic Healite in this way”, she says. Since starting to use it, the incidences of seromas (a collection of fluid that can accumulate at a surgical site) has halved, and she’s found that scars heal better too. She now will only work on abdominal scars along with Lutronic Healite light therapy, using the 830nm light that helps with cell repair and skin healing after surgery. All of which is informed by evidence-based research and clinical studies, which is key to Shannon’s practice.

Dr Joe Dusseldorp (FRACS), a Reconstructive Plastic Surgeon who specialises in DIEP flap reconstruction, says that there’s no question that recovery after breast reconstruction is both physical and mental. “I always recommend my patients consider lymphatic massage and physical muscle training such as Pilates or physiotherapy before and after their surgery not only for the physical rewards but also for the positive mental state that results from physical touch and care. Scar treatments may also be beneficial in some instances. I love working with therapists like Shannon and hearing the positive experiences my patients have had with their various postoperative therapies as they move towards feeling good in their bodies again”.

What about patients who have older scars?

If Shannon doesn’t see patients immediately after surgery, she can still help them, even many years after surgery, and has seen remarkable results with women after just one session. “Breast reconstruction patients, who haven’t had DIEP, tend to see me later rather than sooner. And it's because something doesn't feel right or because something's not quite comfortable. And it doesn't take much work to fix that. A lot of people don’t know what’s wrong, and don’t relate it back to the scar”, she says. “After breast surgery, when women ‘protect’ themselves, the fascia around the ribcage can ‘bind’. The way fascia works is that it’s this delightful network through the whole body, so that ‘binding’ can affect your neck or your shoulder, or it can make you get headaches”.

“Scars are like an iceberg. You can see the top of it, but you’ve no idea what’s underneath. What’s underneath can be tissue-related but also emotion-related. And I suggest that with mastectomies and breast reconstructions, particularly DIEPs which are increasingly happening so quickly after diagnosis, it’s almost impossible for patients to process. People are often a little terrified of their scars so may have never touched them. I encourage people to get to know the new ‘them’. Because this scar is part of you now: touch it, nurture it and be kind to it. Don’t be afraid of it”.

What advice does she have for patients after surgery?

“I tell my patients to stretch and move and smile and be kind. And part of it is, if there is a level of discomfort in your scar, give it some time. I often use the analogy of making bread or pizza dough. You think ‘it’s never going to get there’ as you knead it, and all of a sudden it does. This sort of injured tissue is like that as well. It needs the movement. As for discomfort, if something is really sore or it’s sharp or it’s ‘catchy’, then hold it and breathe. Breathing is the best thing that we have at our disposal. And in terms of recovery, if you’re terrified then it’s really hard to open up your diaphragm but with breath you can open up. I recommend square breathing: breathe in for the count of four, hold for four, breathe out for four, and hold for four.” Shannon’s biggest advice to her patients for after surgery: “smile and breathe, smile and breath!”.

Note: if you’ve recently had surgery, seek the approval of your surgeon or nurse before receiving post-op therapies to support and help with your recovery and healing.

See Pink Hope’s article on other ways to help post-surgery and radiotherapy scars heal. Miriam had a DIEP reconstruction and said it wasn’t as scary as she thought it was going to be – read Miriam’s story.