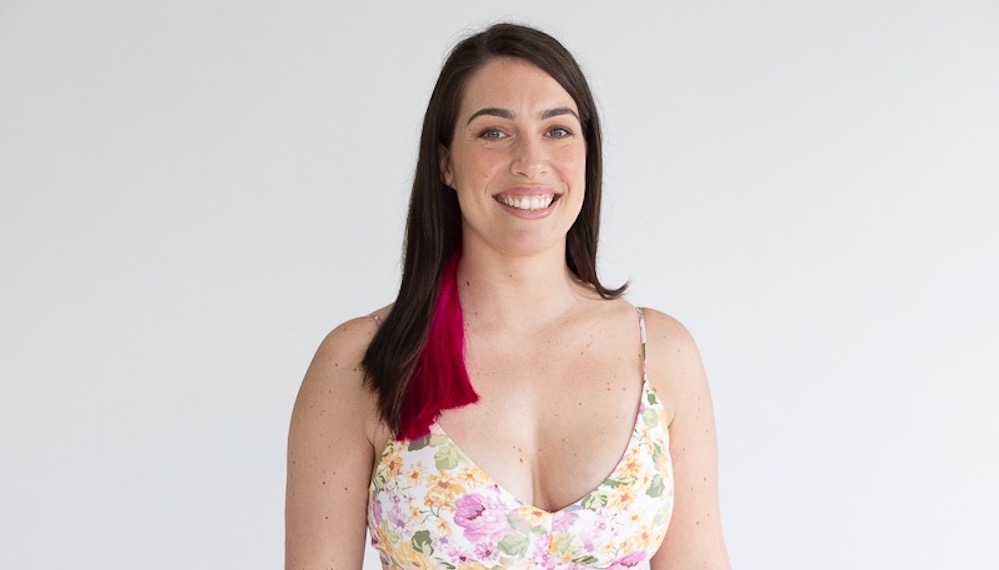 My name is Monique. I was 30 years old when I was diagnosed with triple-positive breast cancer.

I was living in Peru four years ago when I discovered a lump in my breast. I wasn't doing a specific breast check, just lying with my arm above my head. Underneath the bottom of my left breast, I felt a lump. It wasn’t particularly large – about the size of a raspberry, and it wasn’t painful.

My breasts have always changed density throughout my menstrual cycle, so I didn’t think anything of the lump at first. I was living in a very small town, in a remote village. To visit a doctor, it would take me two hours to get there. So, I didn’t do anything at first. But when I mentioned the lump to a friend, she raised the alarm and made me make an appointment.

I had an ultrasound at the hospital and they confirmed that the edges of the lump looked a little dodgy. Then they did a biopsy. And ten days later I got the results. Within 36 hours I was on a plane back to Melbourne. It was a whirlwind.

It was a pretty isolating flight, yet it was comforting because I knew I was coming home to my family. It was the month of October and the flight staff were wearing the pink ribbon for Breast Cancer Awareness month. It seemed like a symbol to me: that I wasn’t alone.

As soon as I arrived home, I saw my GP who sent me to a breast surgeon. I had to go through the process again to have a biopsy, as my doctors wanted their own diagnosis, despite having my diagnosis in Spanish and translated. I had to re-do the MRIs, ultrasounds, x-rays and blood tests. That first week was just chaos. Nobody knew I was back, other than family and closest friends.

Apparently, pathology doesn't lie. I had breast cancer. Everyone was in shock. I was, and am, a healthy person. I exercise regularly, I eat healthily, I don’t have a sedentary lifestyle. I don't even have a ‘watch list’ on Netflix because I'm never still enough to watch it. I'm always on the move.

I’d been living with my fiancé in Peru and we had been planning on have a baby. I’d removed my contraception (I had an IUD_ and we were starting to track cycles. I thought the lump could have been related to my changing hormones. I was told that not only did I have cancer, but that we couldn’t try for a baby. That hurt more than actually hearing that I had cancer. I don’t think it had sunk in properly that I had cancer. I just kept focusing on the news that I couldn’t have a child yet.

When I received my diagnosis in Melbourne, I told my doctors that we’d been trying for a baby and that I didn’t want to leave it any longer. I had to undergo two weeks of IVF so that they could harvest my eggs to freeze. I didn’t have private health insurance (since I’d been living overseas), so I had to pay $16,000 upfront. Medicare does cover a round of IVF, but you do have to pay upfront. Thankfully, my parents loaned me the money, for the IVF and my treatment. My father said: ‘Well, we’ll just throw money at it. You have to get this cancer removed.’ They were amazing. I began to keep a spreadsheet of how much money I owned them, but I had to abandon it – the spiraling costs gave me anxiety. I didn’t need financial worries on top of my health stress. I had to make immediate choices for my health, even though it meant some very expensive appointments.

The IVF procedure was extremely emotional. Then it was time for a lumpectomy, then four rounds of chemotherapy, once every three weeks for three months. My oncologist said: ‘We can shoot you with a shotgun four times, or shoot you with a pistol 12 times.’ I didn’t want to be a weekly burden on my family so I chose to have treatment every three weeks even though I was eager to get back to my fiancé who was still in Peru.

I never vomited during chemo; I did lose my hair. I put on a lot of weight due to the palonosetron, which encourages you to eat and prevent nausea. I was so lethargic and in bed for days. I didn’t leave the house. I was miserable and depressed. I had a psychologist who specialized in women who have been diagnosed with breast cancer and she was helpful. I also had kinesiology. But I was in a deep, dark, hole. None of my friends had cancer – I felt very isolated.

After chemotherapy, they recommended I have my left breast removed, as the margins from the lumpectomy were too narrow. My doctor said I was too young to lose both my breasts. But I didn’t want to have to go through this again. I had a bilateral mastectomy and opted for a prophylactic. We discussed various options, such as taking the fat from elsewhere to use, but since I wanted to have children in the future, they didn’t want to disturb my stomach muscles. Silicone breasts were the best choice for me. I thought that I’d at least get perky breasts out the whole ordeal! I did go a little bigger than my previous side, which has proven difficult, as they’re quite heavy and I can’t fit into my existing clothes. I kept my nipples, as the location of the cancerous lump meant the risk was minimal.

I was afraid of waking up with a flat chest, as I associated my femininity with my breasts and the shape of my body. My doctor reassured me that when I woke up, I’d have something there. When I came round from the anesthetic, I looked straight under my hospital gown. I was relieved!

I had the expander exchange surgery just a few months later. It was sooner than usual as a spot suddenly opened up. My doctor knew I was eager to return to my life in Peru, so she fit me in.

On 13th November 2019 I had my last Herceptin session and heart scan. I flew back to Peru two weeks later, ready to pick up my life. But I sensed a change in our relationship. Whereas my family and friends were so open about my diagnosis and treatment, my fiancé hadn’t told anybody about what I’d been going through. It was his culture. His friends and family just thought I’d been travelling and had decided to chop all my hair off. It was disconcerting and depressing. As time went on, I realized that my partner wasn’t going to be the sort of person I needed, someone who understands that sometimes I’ll break down in tears about what I’ve been through. But he wasn’t accepting of it.

In March 2020, the pandemic hit and flights were getting cancelled. I worked in tourism, which was suddenly redundant. I decided to say goodbye to my life in Peru and return to Australia.

I’ve retrained as a nurse and now work in the oncology ward. It’s very sad as I work with end-of-life patients. But I hope that I can give my patients some comfort and understanding. It makes me realise that despite it all, I’m so lucky. When I was diagnosed, I was young, fit and healthy. Yes, they could chop parts off of me, they could pump me full of drugs. But it was so I could live. Not all of my patients are so lucky. I do struggle with brain fog and I don’t like having to make decisions. I’ve made a lifetime of them. I have trouble focusing and have to write everything down, especially at work.

If it weren’t for Pink Hope and its support groups, I would have felt so lonely. The information they gave me was invaluable – there’s so much to take in. And now I’m eager to tell my story and to help others. Everyone needs to be familiar with their body, to do the checks. Don’t be like me and sit on a lump in your breast for two weeks.

Today, I say ‘yes’ to everything. I celebrate every single birthday. I'm sure my friends and family are sick of it. And they're going to have to stay sick of it for the rest of my life. Because every damn birthday is a gift. So why not celebrate it?